My old Rs-485 hub was getting to small to connect all the device from my Joshua domotica.
Designed a new one with smd components to reduce the size.
The line drivers SN75176 are still dip-8 to change them easy when there’s one broken, not that they ever breakdown (last 10 years zero) but you never know.
It’s stack able for extending the ports.

This program is compatible with the Bascom Avr-Bootloader as it’s shipped with Bascom 1.11.9.9.
You can program the flash with it, but not the eeprom, feel free to modify the code and share it with us.
It’s written in Vb6 and uses the (Free) McsCom module from Mcselec.com for communication. 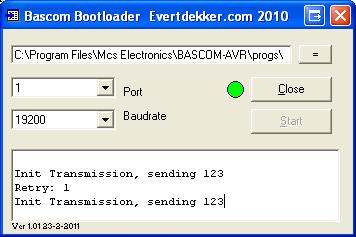 Vpn with Nokia N900 and Fritzbox

This is an small tutorial to connect your Nokia N900 phone with you network at home or work with an secure VPN connection. Very handy for printing at home, accessing you nas or where i´m using it alot for, Remote desktop from your N900. As VPN server i wanted to use my Fritzbox because it´s already there to communicate with the rest of the world.
The build in VPN functionality of the Fritzbox was not compatible with the OpenVpn that was used on the N900, so OpenVpn was also needed on the Fritzbox.

To begin with i have used this article. The author used it to connect 2 Fritzbox together.
Using this tutorial requires some basic knowledge of Linux, but if you have the N900 then you´re have else you have an iphone.

and Steve Jobs determine what you’re doing with it.
First of all some warnings, you can really mess up your N900 or Fritzbox or even delete the whole Internet. Don´t blame me, i´m just some nerd that´s typing this tutorial for you.

Schematic is not that special, it’s an copy from the datasheet of the FT232 from FTDI. Added only the OR port to prevent local echo when transmitting, this is also described in the datasheet.
The converter needed to build in the wall with the Friendlyarm touchsreen the space was limited. Using an Usb a<>b cable took to much space, the connectors of these cables are bigger then the converter itself.
Decide to make a pcb that can direct plug in the usb connector of the Friendlyarm board. Pcb’s are normally 1.6mm thick and that’s just to thin to fit properly. On the back i glued therefore an little piece of 0.5mm pcb to make it just thick enough to fit.

A simple analog 75Ω video splitter amplifier based on the NE592.
What can you tell about this? Not much. I needed a video signal splitter to get the signal from the security cams to the recorder, web server and monitor.
It splits 1 input to 3 outputs.
I made it stackable so that you need only 1 power supply, thus the stack passes only the supply no video.

In this design the gain is determined by R5 3K3, however for some cameras the gain was to high and I replaced R5 with a 25K trim pot meter so you can adjust the gain.

If you want to make one yourself, contact me for the pcb or download the Eagle-cad files here.